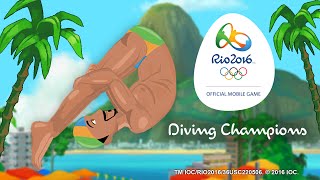 - Localized for 9 different languages including Japanese, Korean and Russian!

- Online medal table for all 205 IOC nations competing in the 2016 Rio Games!

SOMERSAULT, TWIST AND DIVE INTO THE OFFICIAL MOBILE GAME OF THE RIO 2016 OLYMPIC GAMES.

DIVING CHAMPIONS - Splash down and unlock a team of crazy aquatic athletes, representing countries from around the world, each with their own unique power ups and abilities.

HIGH DIVING TRICKS - Become a Diving Champion by nailing your dive attempts and unlocking new dive styles like the Pike, Straight and Tuck!

COMPETE & TAKE HOME THE GOLD - Worldwide leader boards will display your score against the world, while you contribute to your nation's score to decide which nation takes home gold.

NATIONAL PRIDE - Align yourself with 1 of the 205 competing nations from the Rio 2016 Olympic Games and represent your country in on-going global competitions.